Hunt for the Magmatrox is the 42nd episode of Hot Wheels Battle Force 5.

In a forest scattered with lava pools here and there, red Sark Sentries fire at the Saber, Chopper, Reverb, Tangler, and Buster, to which they dodge. The six drivers are looking for a creature called a Bogsquatch and need to get it to safety. Why the Red Sentients have sent their hunting drones to this forest puzzles even Sherman, though Vert guesses they're trying to flush something out of hiding.

They eventually find one and it snarls at the group. Stanford backs away and gets ready to fire the sound cannons, but Agura tells him not to hurt it. It flees from the group, afraid of them. A reluctant Stanford stands down. The team follow it to the edge of a cliff and corner it. Just when they are about to get ready to transport it, they hear a roar somewhere in the forest. The Bogsquatch's mother comes to the other Bogsquatch, who turns out to be her child!

They get out of the way when the mother attacks them. Vert asks Agura for any ideas on how to trap them, to which she replies she was hoping Vert had one. Sherman alerts the group to Red Sark drones flying down and opening fire on the Bogsquatch family and the team. Stanford and the Cortez brothers take the attacking drones down.

Agura tells the group to back off and don't corner them. This gives Vert an idea, and he says that they probably should corner them into the portal. He uses the Battle Key given to him to open one and the group slowly drive to them. The two animals back away from them, the mother eventually catches the scent of territory and the bogsquatches go into the portal. Vert locks the zone down as the others step out.

A few minutes later back at the Hub, the group show Sage their findings. Krytus is searching for a Magmatrox, dinosaur-like creatures that once roamed lava based Battle Zones by the thousands until the wars came and they were hunted to near extinction for their horns by the Reds, as it enhanced their psychic powers. There's only one Magmatrox remaining and Sherman has pinpointed where Krytus is going next to find it.

Sherman and Spinner remain at the Hub with Tezz, everyone else mounts up and heads for the Inferno Zone.

--The five enter the zone and stop atop a cliff's edge. While Agura admires the view, A.J., being out of his element, turns the air conditioner in his truck on and up to high.Key Events 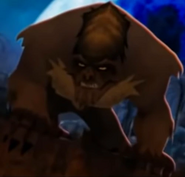 Add a photo to this gallery
Retrieved from "https://hotwheelsbattleforce5.fandom.com/wiki/Hunt_for_the_Magmatrox?oldid=14941"
Community content is available under CC-BY-SA unless otherwise noted.